In 2017, Irene Paterson lost her only son, Roger Wong, to fentanyl poisoning. Roger had been in recovery for six months, and then a very close friend of his died. Roger couldn’t get over it – he relapsed once and it killed him.

After Roger’s death, Irene was traumatized. She joined the online group Moms Stop the Harm, and learned about a Western Canadian initiative called Flags of Hope. In 2018, she held a workshop at Toronto’s Trinity Church, in which participants wrote and coloured on white cloth flags memorializing friends and loved ones who had died of opioid overdoses. The flags were displayed in Nathan Phillips Square at Toronto City Hall on Opioid Awareness Day in August 2018.

Late last year, Irene, working with the multi-service agency for at-risk, socially isolated women called Sistering, thought about the memorial AIDS quilts of the late 1900s, and decided to try to have the original flags turned into quilts. Mical Pearlman, a YHQG member who volunteers with Sistering, suggested approaching the guild for help.

Guild members Bev Stevens, Jacintha Bennell and Wendy Dines worked with representatives from Sistering to develop a prototype quilt combining the original flags and adding a purple fabric border, to honour the Flags of Hope signature colour. The original flags, intended to be hung on a line, not included in quilts, had to be carefully trimmed and stabilized in order to produce neat blocks for quilting purposes. Ornamental items, such as feathers and other embellishments, had to be carefully removed before the quilting process, and then, just as carefully, reattached to their original blocks. Irene Paterson produced a central “Flags of Hope” block for insertion in the centre of each quilt top. A talented quilter/designer, Bev Stevens prepared every quilt top for quilting, using different colours for the interior sashing of each quilt, all edged by purple borders. Several very experienced, talented quilters, Jacintha Bennell, Wendy Dines, Irena Hopper and Ann Sutherland, completed the sandwiching, quilting, and binding of each quilt, and added sleeves to the top and bottom so they could hang properly. It was a labour of love, especially for Bev Stevens, who lost her beloved nephew to an opioid overdose shortly after this quilting project began.

The YHQG quilts, together with a beautiful quilt prepared by Sistering clients and put together by Mical Pearlman with individual embroidered squares, will be displayed on August 31, 2021 at Nathan Phillips Square, City Hall, Toronto, as the Opioid Awareness Flag is raised at 11:00 a.m.. At 8:00 p.m., in Roundhouse Park, 255 Bremner Boulevard, the CN Tower will be illuminated in purple in recognition of International Overdose Awareness Day.

York Heritage members are proud to have been a part of this project. 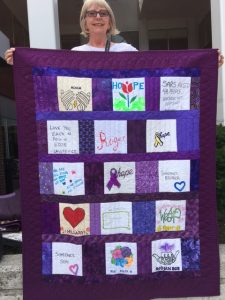 One of the completed Flags of Hope quilts 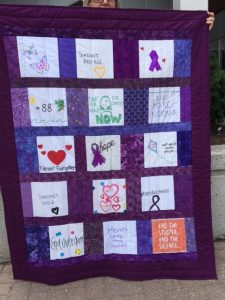 Another sample Flags of Hope quilt