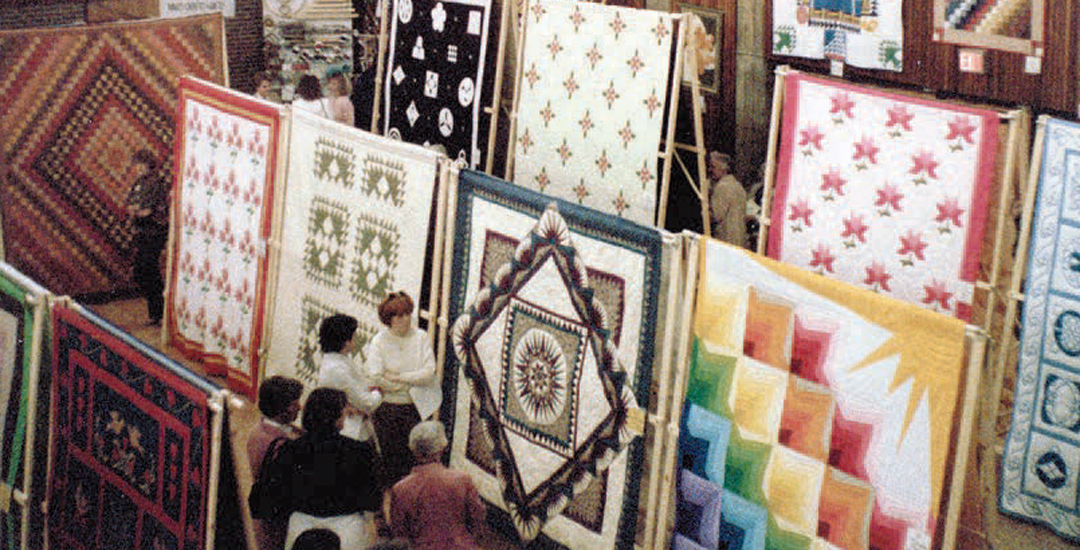 Where It All Began: Quilt Canada ’83

It seems only a short 38 years have passed since quilters got together at Quilt Toronto ’81, co-hosted by the Etobicoke and York Heritage Quilt Guilds, when the Canadian Quilters Association/Association canadienne de la courtepointe (CQA/ACC) was founded. Ottawa quilters Ann Bird, Isabel Johnson and Joyce Legault came back home from the gathering so enthused they immediately founded the Ottawa Valley Quilters Guild (OVQG), with Ann as president. The steam continued to build as Ann attended her first CQA/ACC annual meeting in 1982.

“Armed with my excitement in the formation of the OVQG, I offered our guild as host for Quilt Canada ’83. Admittedly, I did this without any consultation – I just came home from the CQA/ACC’s first annual meeting and told them we were on. I was so enamoured with the notion of Canada’s Capital hosting the first annual, national quilter’s conference.” 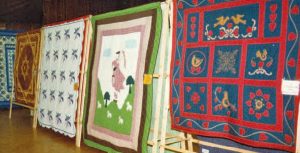 “A blur for me now,” says Ann of the conference, held on the Carleton University campus, and preparations. She had a lot to do: act as liaison as Ontario’s Regional Representative between the CQA/ACC and the OVQG, handle being President of the host guild and teach workshops at the event. Happily, the campus offered the benefit of having everything in one location: accommodations, dining, workshops, hospitality and the quilt show itself.

Arranging the huge quilt show was taken on by Bernice Fensom. She had to make the call for, assess, collect and protect more than 100 quilts from the new CQA/ACC membership. “It was up to me to assemble the best show possible and the first question was how to address the quilters across Canada.” That’s where CQA/ACC stepped in, telling members and guilds to send Bernice a photo or slide of proposed entries. 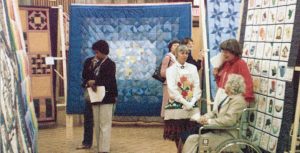 Bernice, in the tulip apron, took on the enormous job of arranging the first National Juried Show.

Once chosen quilts were in Bernice’s home (“I had to be reassured by my insurance company that the quilts would be safely covered while stored in my spare room”), she and her committee wrestled with how to display them safely, but accessibly, when the conference’s show was open to the public May 14 to 16, 1983. Commercial equipment was not feasible, being too costly to rent for a new quilt guild. Bernice remembers, “So we came up with the idea of building wooden stands.” Enter the Husband. Bernice says, “My husband offered to make easy-to-assemble, portable stands in our garage.” The stands worked. Wall hangings went on dowels to hang on the walls of Porter Hall at the university. The rest of the quilts adorned the new wooden stands. After the show, they were bundled up, stored and rented out to other guilds, repaying their initial cost many times over.

Next, the committee wrote up a catalogue with a description of each piece, the quilt’s size, owner’s name and price if the quilt was offered for sale. The committee spread the word in print, radio and TV media – no Internet in those days!

As the conference drew nearer that spring, organizing committee members chose the tulip (an echo of the Capital’s annual Tulip Festival) as their design logo for the aprons they would wear to designate themselves as hostesses. A raffle quilt was designed using the spring theme. Blocks were requested through the CQA/ACC newsletter. Once the blocks arrived, the quilt was assembled by the Osgoode Quilt Group. Three prizes were awarded to the top quilt block makers. 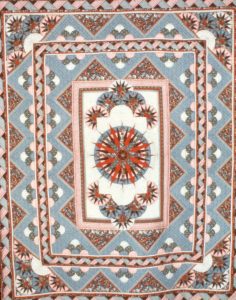 The 1983 Viewers’ Choice was Baccalaureate by Jean Hillis.

Foremost in Bernice’s mind was safety for the quilt treasures on display. Many were hand stitched and quilted. “We had to hire guards and arrange for members of our guild to wear white cotton gloves to handle the quilts, so the public wouldn’t touch them,” she recalls. Georgia Beale was in charge of the 13 workshops taught by Ann Bird, Stephanie Brand, Catharine Corbett, Heather Danylewich, Suzanne Elder, Polly Greene, Betty MacGregor, Sandi Pope, Barbara Robson, Louise Smyth, Marilyn Stothers and Sheila Wintle. Workshops were received with much enthusiasm. The classrooms were up a small hill and Georgia remembers pushing ironing boards up that same hill on a wobbly cart. The ironing boards kept falling off, much to Georgia’s chagrin. 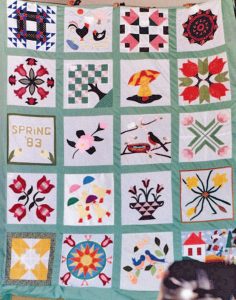 Looking back, Ann says her “primary impression is of the camaraderie which grew among the committee and volunteers. I know some of those friendships continue to this day. There was such a passion for quilting among those who came to Ottawa for workshops and get-togethers and there was the awesome quality of the quilts themselves.” Enthusiastic conference visitors, including 207 delegates and over 1,000 visitors each day, chose the quilt, Baccalaureate by Jean Hillis, as their favourite. The closing banquet offered Marilyn Holowachuk, editor of Canada Quilts, as the after-dinner speaker. A fitting finale. 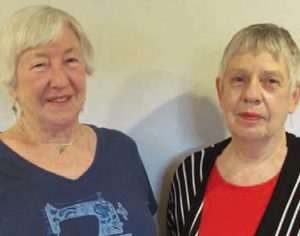