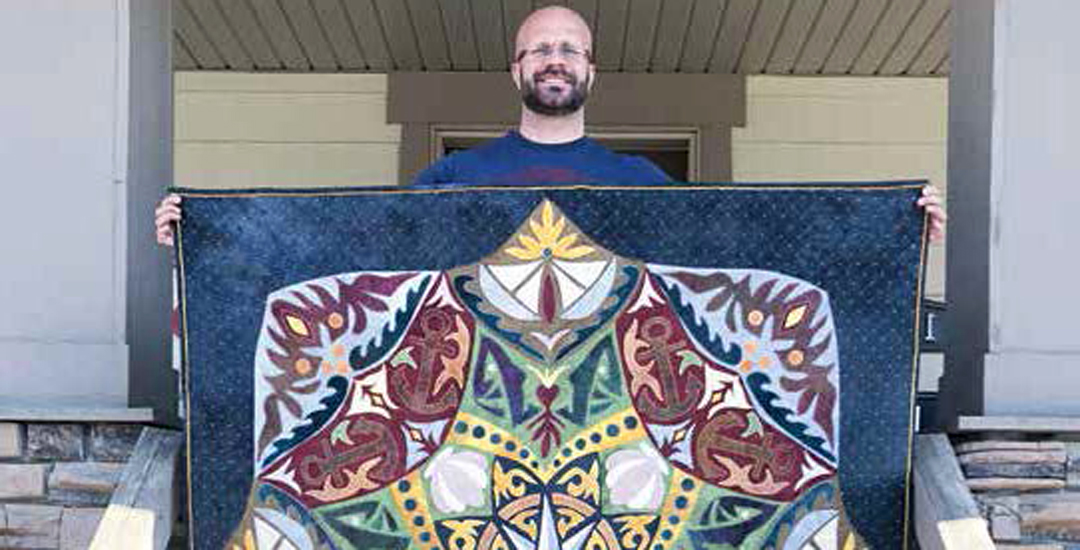 My New Year starts the same wonderful way it does every year, with friends. 2020 had barely begun and I was on my way to visit Mexico City for a week, followed by a five-week detour to Puerto Vallarta, also in Mexico, for what I considered to be a well-deserved winter break. My time in Puerto Vallarta was not all beaches and Margaritas, but I will plead guilty to having indulged in a few. I could not imagine being  away from home for six weeks and not having any quilting to do, so I brought some English Paper Piecing (EPP) with me to work on while there. (A little side note: While in Puerto Vallarta, I met up with two other men who are quilters, Jason Bieber from Peachland, BC, and Carl Brown from Palm Springs, CA. Coincidentally, we were all working on EPPs. They have both completed their projects, while I have yet to finish mine.) 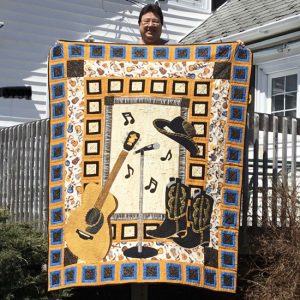 Wanda Long, from Bridgewater, NS, shared Go, Sing Me A Song! based on a Coach House
design called Live at the Honky Tonk.

As my stay in Puerto Vallarta was coming close to an end, I contemplated extending my visit but by then news of the coronavirus was  starting to emerge, sounding both alarming and grim. As much as I wanted to stay in Mexico, it was time to come home. Within three weeks of my return to Ottawa, governments were closing borders to non-residents and asking people to stay at home, except for what was absolutely necessary. Shortly thereafter, businesses were advised to close and all public gatherings were being cancelled; this included all guild meetings. Guilds also took the wise decision to cancel their quilt shows for March and April 2020. Many of us were hoping that the  shows scheduled for May and June would be spared. Much to our dismay, it quickly became apparent they would also be cancelled. 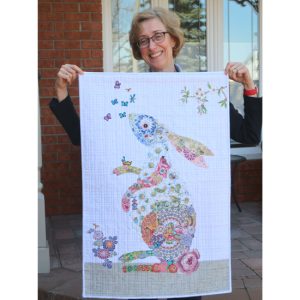 This delicate little bunny collage, Hip Hop, was made by Marie-Claire Charette of
Orleans, ON, using Laura Heine’s pattern.

With all local shows cancelled and our beloved Quilt Canada postponed (and subsequently cancelled), it was heart-breaking to read  Facebook comments from quilters across the country expressing how much they were missing their sewing get togethers, guild meetings, retreats and shows. It dawned on me that I needed to start thinking outside the box and put my creative juices to work. And plan I did. I created A Drive-by Quilt Show. 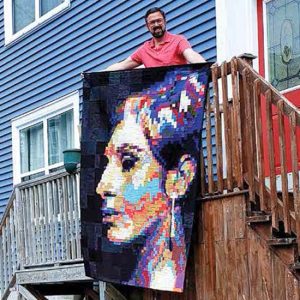 The Quilted Funny Girl was made by Corey Allan Follett of St. John’s, NL; it is
based on a photograph taken by Stephen Shapiro and used with his permission.

In order to pull this idea together I needed some help, so I put out a call on Facebook for quilters in the Ottawa region to see who might be willing to participate. I had two objectives: the first was to display a variety of quilts and the second (and what for me was the most  important) to showcase quilters who were isolating at home. 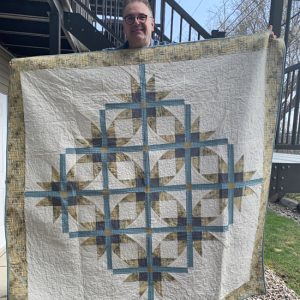 On the morning of April 25, 2020, camera in hand, I set off to meet 20 quilters displaying their beloved quilts in front of their homes for the Paul Léger Quilts Drive-by Quilt Show. It was so wonderful to see familiar smiling faces and to meet these quilters. We even had one quilter who showed us her quilt hanging from her sixth-floor

balcony! My 196.7 km journey took seven hours – well worth the time and effort it took to get 22 photos of these makers and their work. 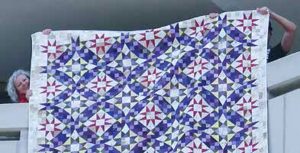 We suspect that Janet Ferguson from Ottawa was dreaming of far-off shores when she
shared her Bonnie Hunter mystery quilt, En Provence, from her sixth-floor balcony.

The next afternoon I posted the show on Facebook. It was a resounding success! Reading all of the comments, it became very obvious that I needed to organize and host more Facebook shows. So, with the help of another post, I requested additional photos, but this time I wanted the pictures of quilts and their makers to come from all across Canada. 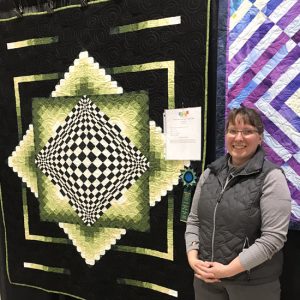 This eye-catching Convex Illusions, an optical illusion designed by KwiltArt’s Kathleen
Andrews, was the quilt that Bernadette Schultz of Swift Current, SK, shared.

Quilters, as quilters do, answered the call. In no time, I started receiving emails with photos. My Ottawa drive-by show quickly morphed into a national happening. I even received a few photos from quilters beyond our Canadian borders. With the success of the first two shows, and with the quantity of photos I received, I ended up hosting a total of five shows, each as wonderful as the last. On average, it took three to four hours to format and arrange each one, but at the end of the day, when I saw the joy it brought to so many people, I couldn’t help but feel that it was worth every minute. And yes, I would do it all over again, without any hesitation.

Now, like the rest of you, I am hoping that sooner rather than later life will return to what we knew and we will once again be seeing each other in person at guild meetings, workshops and quilt shows. Until then, stay safe and keep quilting. 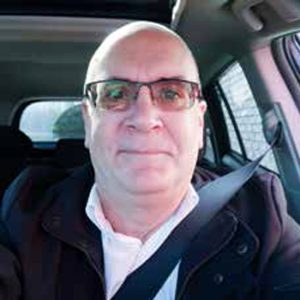 Organizer Paul Léger drove over 195 km to get 22 photos for his first Drive-by Quilt Show to showcase quilters who were isolating at home. It truly demonstrates the camaraderie of Canadian quilters and the fortitude of one!

Header image: Master Mariner’s Rhapsody was designed by Edmonton’s Corey Ralph and celebrates his Papa’s 40 years on the sea.