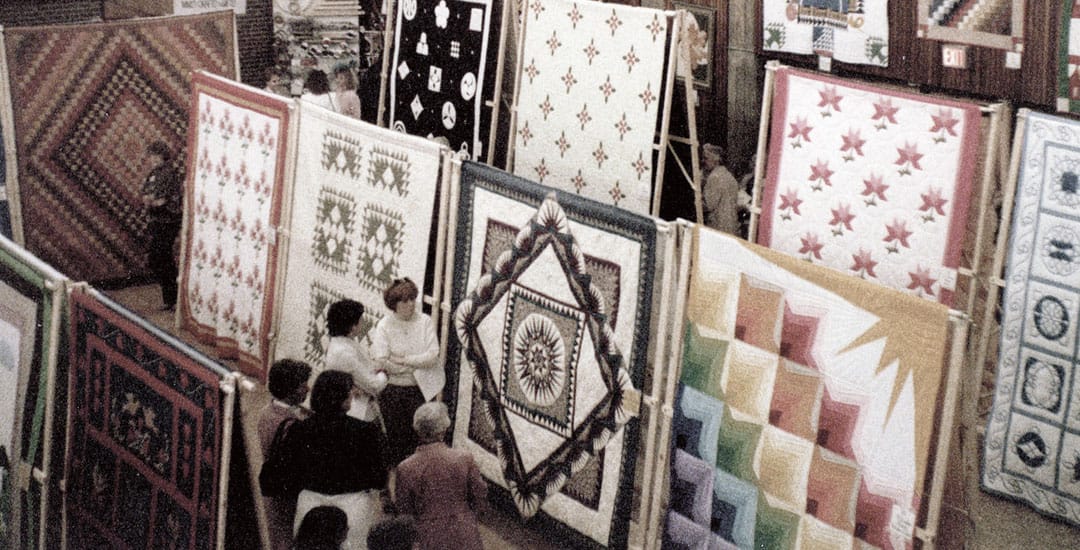 In 2003, Marilyn Walker, a founding member and the first President of CQA/ACC, wrote a fairly detailed accounting of the formative years of our organization. An updated version and interview with Kay Phillips was written in 2011 and has appeared on our website under the title: CQA/ACC Thirty Years Later: A Virtual Conversation with Kay Philips. While not including all the details of the earlier article, Kay emphasizes the fun and camaraderie that come with volunteering, having the ability to communicate across our entire country and traveling to many locations for our conferences. Both are a good read. Enjoy!
Jane Cramer
President CQA/ACC

By Marilyn Walker
Published in The Canadian Quilter, Spring 2003

Quilting has always been an important component of our culture. The ‘70’s was a decade of rebirth and stretching, stimulated by the exhibitions and competitions organized to celebrate the American Bicentennial. Quilters’ Newletter Magazine appeared in 1969 followed by Canada Quilts in 1973. Quilters in Canada and the U.S. were becoming restless seeking opportunities to acquire new skills and expand existing ones. During the 1980s networking was apparent.

When in May of 1982, York Heritage offered to host the first annual meeting of CQA/ACC a partial executive had been assembled with 40+ people at York University. CQA/ACC was officially launched. These members arrived enthused and excited to be part of the foundation of this budding organization. The workload was daunting; the challenges many-establishing a national credibility with no track record required ingenious creativity. Contacts were made with the Canadian Craft Council, the Ontario Crafts Council and the Federal government.

The team were dedicated, committed and determined to succeed. Ann Bird convinced her group of quilting friends to organize into the Ottawa Valley Quilting Guild and within a few months they offered to co-host the first CQA/ACC conference in Ottawa. The OVQG quilt show committee organized the conference and the CQA/ACC executive focused on the challenges facing it: a set of standards, a logo contest, and assisting the OVQG in writing a grant proposal to the federal government requesting support for the upcoming national conference, as well as preparing for incorporation. Jobs were divided between teams who worked independently and shared their ideas with the group at monthly meetings held in Toronto.

The dedication of the executive was infectious; not only did the federal government support CQA/ACC with a grant of $1000.00 – a real morale booster but the Mayflower Hand Quilters’ Society came to the conference prepared to announce that they would co-host the 1984 CQA/ACC conference in Halifax. Quilters now had a vehicle through which to network. The conferences offered stimulating, topical workshops featuring teachers with national or international credentials.

Quilters joined and by 1984 200+ quilters arrived in Halifax for an unforgettable elixir of Nova Scotian hospitality presented in an environment saturated with quilts and retail opportunities. CQA/ACC was now firmly established and guilds blossomed across the country and members were eager to be active participants. Their dedication and commitment has caused the organization to grow during the last 20+years. Kudos to our pioneer visionaries!

CQA/ACC Thirty Years After: A Virtual Conversation with Kay Phillips

Members of the CQA/ACC have access through this website to a few specific facts regarding the early days of the Association but not to the stories and the people behind the headlines. Readers can find out that the Association was formed in 1981 during Quilt Toronto and incorporated on April 14, 1983. You could also find out that this year Halifax will be hosting Quilt Canada for the third time. We asked Kay Phillips, the Association’s founding Vice-president, to fill us in on the behind-the-scenes activity that led to the formation of the Canadian Quilters’ Association.

Kay noted that quilting has always been a part of our Canadian culture and that in the 70’s there was a resurgence of interest in this art form around the time of the American Bicentennial. Quilters Newsletter Magazine began publishing in 1969 and Canada Quilts, a Canadian magazine which is no longer published, followed shortly after that in 1973.

In 1981 the Etobicoke and York Heritage Quilt Guilds co-hosted Quilt Toronto at York University. It was during this conference that a small group decided it was time to form a national organization.

Mary Conroy, editor of Canada Quilts, chaired a meeting to discuss the pros and cons of establishing just such an association. Following this meeting a steering committee was formed comprising the following people: Dorothy McMurdie, Windsor; Allyson Turner, Windsor; Phyllis Brown, Blair; Nina Stahlschmidt, St. Catharines; and Margaret Walpole, St. Catharines. Their mandate was to assemble a national executive and formulate a constitution within a year.

Marilyn Walker and Kay Phillips were added as proposed President and Vice-president and Ann Bird as Ontario Representative. These eight women wrote the original constitution for the Association. Kay singled out Marilyn Walker for high praise, stating that she was the group’s fearless leader and that she was able to accomplish things that made the entire group look good.

With the leader in place, the group worked many long hours to organize the first conference. Today’s conference committees can take advantage of the groundwork laid by this group of volunteers. Kay pointed out that it was worth noting that not only did they work tirelessly to get the Association off the ground but they shared many a super potluck lunch, laughed a lot and shared many quilt-related ideas. And while this is not part of the Conference Planning Manual, it is an important aspect of conference planning.

The CQA/ACC was officially launched in 1982 when the York Heritage Guild hosted the first annual meeting of the CQA/ACC. With a partial executive and 40 plus members in attendance, the organization got off the ground.

The Ottawa Valley Quilt Guild hosted the first national conference in Ottawa in 1983. As hosts, they dealt with the organizational details for the conference and this allowed the newly-formed executive to focus on the many challenges facing a new organization. These included having a logo contest, establishing standards for the Association and preparing for incorporation.

Quilters in all parts of the country now had a vehicle through which they could communicate. Since the beginning, the conferences have been held in varied locations across the country. Each conference has been unique. Members have been offered the opportunity to participate in workshops led by local, national and international teachers. The CQA/ACC website now provides a conference planning summary for the local planning committee which outlines what must be included in the alternate year conferences.

Kay summed it up by emphasizing that all of the founding work was done by volunteers. She encourages all members of the Association to become involved by volunteering in some capacity as part of a committee, as a guild executive member, on a quilt show committee or with a Quilt Canada conference. There will be lots of work to do but the rewards of working with other like-minded people are worth it.

The Dorothy McMurdie Award was established in 1988 to recognize individuals who have made a significant contribution to quilting in Canada. It paid tribute to their accomplishments and documented their contributions to our Canadian quilting heritage. This award was discontinued in 2015. It has been replaced by the Dorothy McMurdie Founders Award, which is presented to a CQA/ACC member, whose National Juried Show entry exemplifies outstanding workmanship in an original design. The quilt cannot contain computerized embroidery or quilting. Past recipients include:

The Agnes Boal Bursary was sponsored in memory of Agnes Boal who was CQA/ACC president from 1991 to 1992. Her love of quilting and the Association was evident to all who knew Agnes. It was presented annually to CQA/ACC member guilds to support them in hosting a Canadian teacher to conduct a workshop or lecture. This bursary was discontinued after 2015. Winning guilds include:

CQA/ACC Presidents Through the Years

Gallery of CQA/ACC Presidents Through the Years