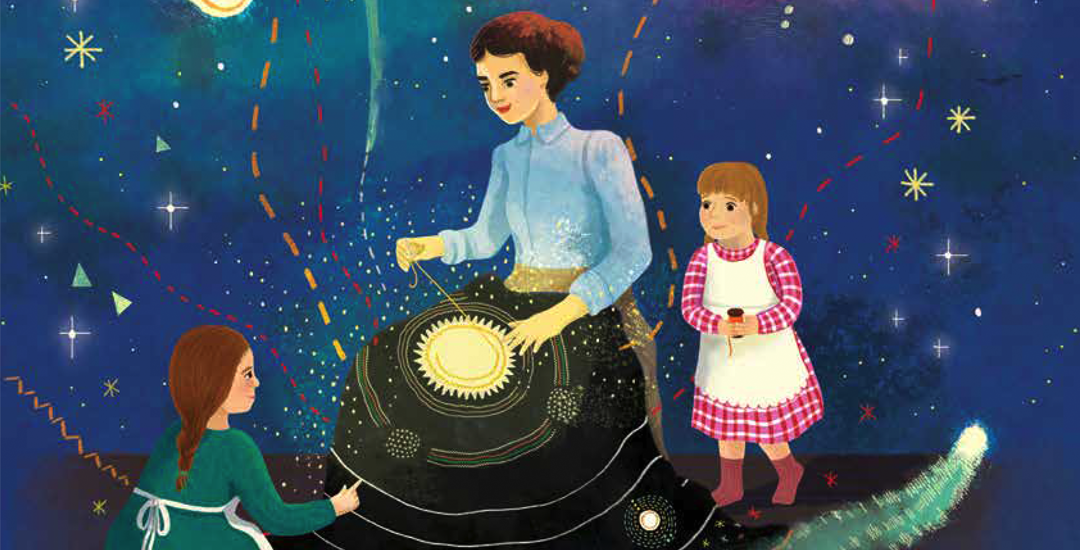 She Stitched the Stars

You’re in luck! A new children’s book has just been published by Albert Whitman & Co., which imagines the story behind the making of Ellen Harding Baker’s Solar System Quilt.

Baker, an Iowa storekeeper’s wife, mother of seven, and astronomy lecturer, started the quilt in 1876 and completed it seven years later. It depicts what was known of the solar system at the time, illustrated in wool and silk thread, braid, and appliqué. 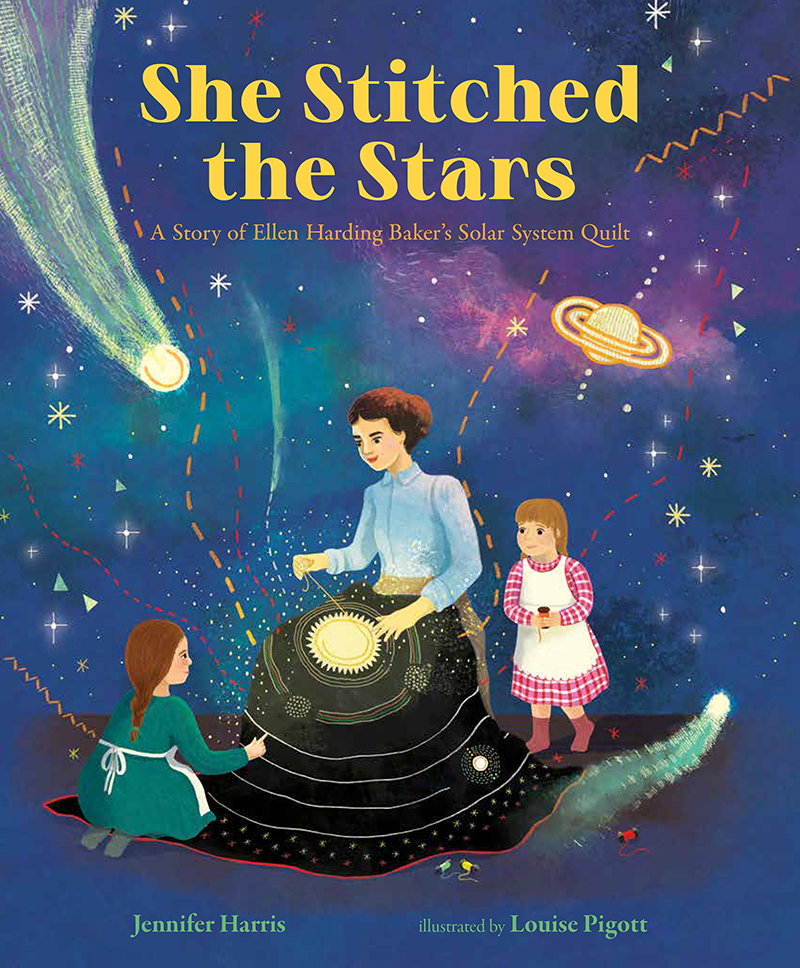 Author Jennifer Harris, an English professor at the University of Waterloo, makes a point of studying women writers from the nineteenth century.

“I’m always digging, looking for stories of people who’ve been forgotten or haven’t been fully celebrated,” she explains. “When I stumbled across Ellen Harding Baker, I was transfixed.”

Although Baker was not a writer, Harris knew she wanted to write about her. While it may not seem unusual today, in the early twentieth century, the idea of a woman studying and lecturing in astronomy, and creating an extraordinary teaching tool for students, was remarkable. In fact, the story of Baker’s quilt made the local newspaper and was shared across the United States.

As noted in the book’s historical note, the local paper reported: “We had a lecture on Astronomy by Mrs. M. Baker, of this place, on last Saturday evening. She is a deep thinker and thoroughly understands her subject. She has just finished a quilt that has the solar system worked in it, and is much admired by all who see it. Mrs. Baker has been seven years in completing this quilt, and has taken a trip to Chicago to view the comet and sun spots through the telescope that she might locate them accurately.”

Newspapers reprinted the article ”though in a way that suggested she was an oddity,” says Harris. “Notably, the New York Times derided her efforts as ‘somewhat comical’,” she says in the Author’s Notes.

“Otherwise, she wasn’t present in the historical record, because she wasn’t deemed worthy of preservation as a woman whose accomplishment was craft.”

“So that meant I had to look at contextual evidence to figure out more about her life,” Harris explains. 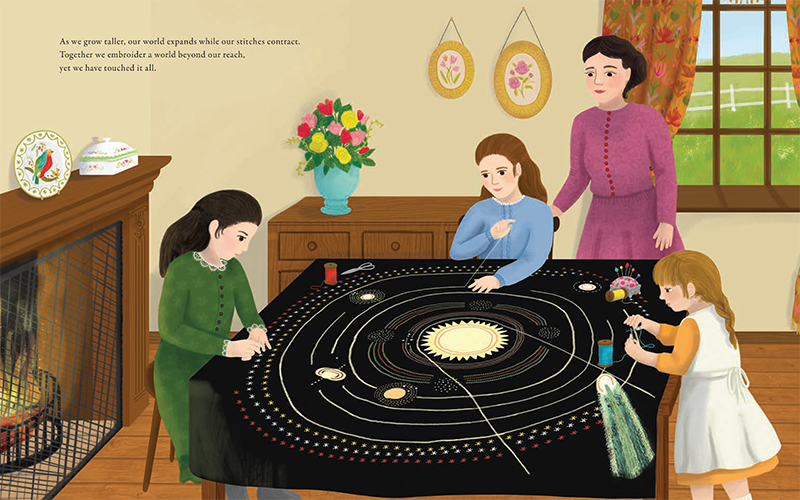 We begin with the sun and radiate outward.
As Mama stitches, we name the stars after ourselves, our friends, our pets.
Dog stars and pig stars and new-baby-brother stars.

“In the end, the book is told through the eyes of her daughters, as they watch the quilt take shape, actively participating along the way both physically and imaginatively.”

And that’s where the story will hold a special place in the hearts of quilters. Through Harris’s imagination, and the illustrations by Louise Pigott, we are taken into the world of three young daughters growing up under all the constraints placed on girls at the time, but with a mother who encourages them to explore and appreciate the world around them, and beyond.

They learn to embroider, and help with the creation of the Solar System Quilt, all the while imagining the cosmos, learning the planets, and drawing the constellations.

Baker’s family kept the quilt for many years, and eventually donated it to the Smithsonian’s National Museum of American History.

Harris has several quilts of her own, inherited from her family. “My father was raised on a farm surrounded by many unmarried aunts and great-cousins,” she says. “And the women were all quilters; they even taught him to quilt.” 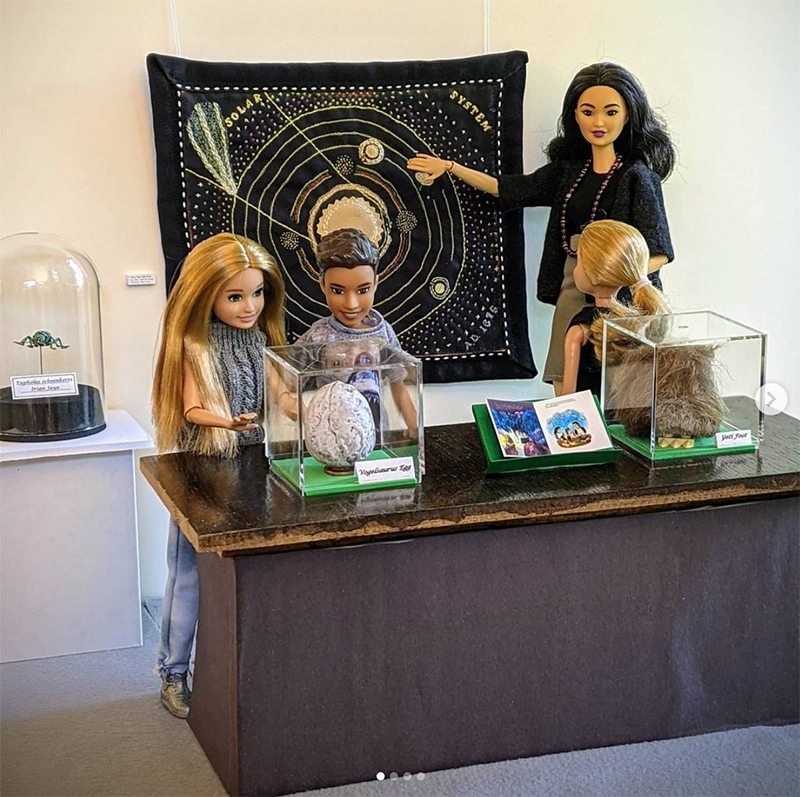 Harris hasn’t seen the Solar System Quilt (it’s not currently on display at the Smithsonian), but she did make a tiny replica of it for a virtual book tour created with her children. You can see more delightful dioramas like this one @mypbjam on Instagram.

Cozy up with fall fabrics.