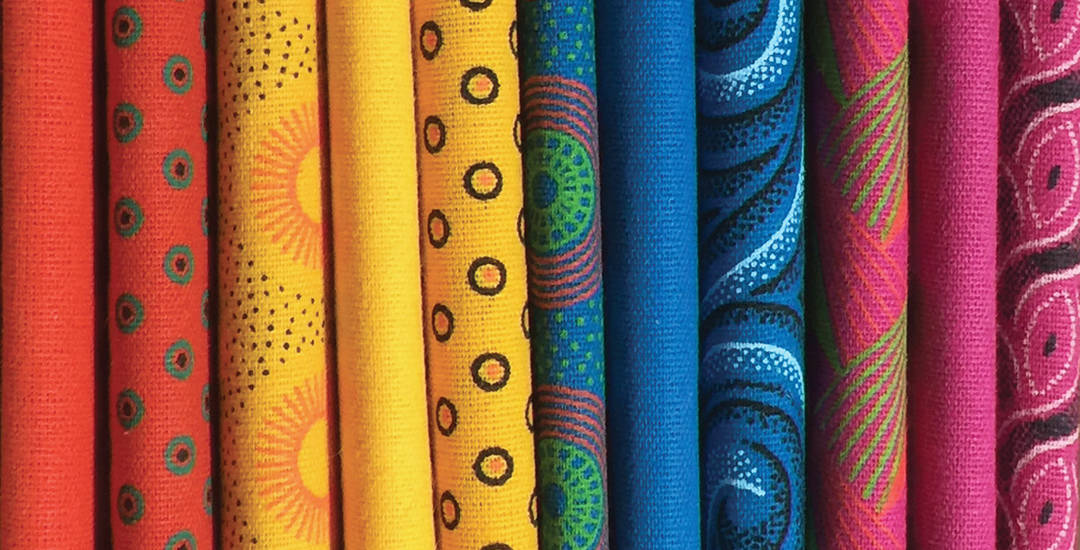 The Bolt and the Beautiful: The Shweshwe Saga

Born in South Africa into a family of creative seamstresses and knitters, it is no surprise that I love shweshwe. This traditional, 100 percent cotton print evokes many memories, the first of which is as a little girl in the fabric warehouses of Cape Town, South Africa, with my mother as she bent over the bolts making decisions. It is an aromatic memory: the sweet starchy smell of sizing, used to protect shweshwe for its sea voyage from Manchester, England, to South Africa, comes to me when I think of those excursions.

Although there is evidence of indigo cloth reaching the East Coast of Africa via Arab and Phoenician traders as early as 2400 BC, it was only after AD 1652 when the Dutch East India Company established a port at the Cape of Good Hope on their route between Europe and Asia, that this textile was introduced to Southern Africa. By the early 1800s, the region became part of the British colonial empire and their cultural practices, along with those of German and French settlers, influenced the lifestyle of the local indigenous people. After 1845, a Modesty Law was introduced whereby Africans had to cover themselves from neck to knee when they entered pioneer settlements. Since there was no fabric production in Southern Africa, the region became a market for fabrics produced in Europe. At this time most European settlers were wearing factory manufactured calico print, especially indigo print, which formed part of the folk-wear of most central European nations. 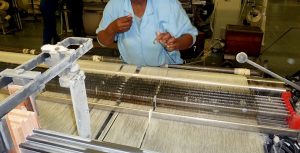 The story goes that King Moshoeshoe I, of the Sotho people, was gifted indigo print fabric by French missionaries in the early 1840s and the name “shoeshoe” or “isishweshwe” was born, named for the king. At the same time, German missionaries were introducing their “blauwdruk” to Xhosa people. As a result, in Xhosa the fabric is called “Ujamani” because it came from Germany. 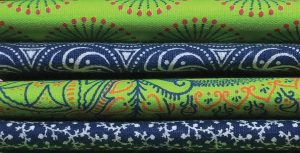 Europe has a rich heritage of indigo folkwear, namely “blauwdruk” in Holland, “blaudruck” in Germany, “kékfestö” in Hungary and “modrotisk” in Czechoslovakia. All of these fabrics entered the South African market from colonial times to 1990. There were even imports from Stifel and Sons Inc. based in Wheeling, West Virginia! South Africans called these prints “Mericani.” By far, the largest producer was the Spruce Company based in Manchester, England, whose Three Cats brand survives to this day.

With no idea of this history, I grew up calling it African print, because it was the fabric worn by so many indigenous South African women for cultural ceremonies, especially in the rural areas. During Apartheid, it was not uncommon for white liberals to wear shweshwe bought at the station road shops where African women shopped. I am sometimes asked whether this was not regarded as cultural appropriation, but in the South African context, it was regarded as way of expressing solidarity and equality. 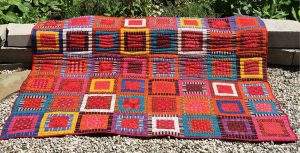 For generations, shweshwe was a colonial product shipped to South Africa, until 1982, when a South African company named Da Gama Textiles was granted permission to produce shweshwe under license from the mother company in Manchester, England. At this stage, they introduced chocolate and red alongside the indigo prints. A decade later, two years after the release of Nelson Mandela from prison and the official end of Apartheid in 1990, the exclusive rights to design and production of the branded Three Cats range of shweshwe were sold to Da Gama Textiles. To this day, the Three Cats back stamp is proof of authenticity of this heritage cotton print.

Da Gama Textiles has introduced innovations while still keeping the classic originals in production that are required by cultural ceremonies. One can now purchase shweshwe designs in orange, cream, turquoise, pink and even lime green, but they are all still woven on 36″ wide looms and discharge printed the classic way – plus they have sizing added during production.

The reason for the addition of the waxy starch was to protect the cotton for the long sea voyage from England to colonial markets and to this day many a shweshwe fan has been known to bury their face in the fabric to inhale the waxy smell of the sizing! After a prewash, one is left with a soft durable textile with a wonderful hand and drape, suitable for all sewing, such as garments, bags and quilts. It is no wonder that shweshwe is so beloved in South Africa, not only for traditional cultural purposes, but now by fashion houses as well.

Discharge printing was cutting-edge technology from the industrial revolution onwards, but it is no longer in use by most modern commercial textile printers. The cotton fabric is dyed in synthetic indigo, then run through copper rollers with designs etched on their surface to allow a weak acid solution to be discharged through the little holes in the rollers, thus “bleaching out” the design from the dyed cloth. Many of the designs are classics that display their roots born out of colonial trade between Europe and Asia. 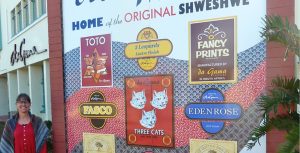 It comes as no surprise that Da Gama Textiles supports the local community in various ways. They assist local sewists by supplying all sub-standards, rags and fents (short imperfect ends of finished fabric), to their local factory shop where sewists buy at excellent prices. The women feed, clothe and school their children by making and sewing shweshwe garments from these commodities. Often, it is only the grandmother or mother who supports the entire family with this sewing. Amongst several other projects, Da Gama Textiles is also working with a group of abused women and children and their caregivers, who make items from various off-cuts to sell in shweshwe retail outlets. 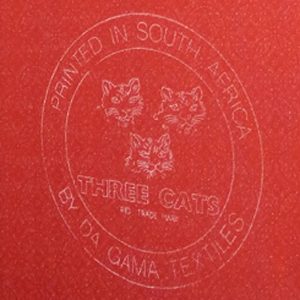 Since our family’s move to Canada in 2001, visitors from South Africa brought me gifts of shweshwe to add to my precious sewing stash. In the summer of 2013, I started my own business, importing shweshwe from South Africa. I was privileged to visit Da Gama Textiles in Zwelitsha, where I was saddened to hear that, at present, there are inferior quality copies of this lovely fabric being produced offshore and that cash-strapped consumers in South Africa have been snapping them up. Consumers are reminded to always check for the Three Cats back stamp to ensure they are purchasing the authentic product.

Da Gama Textiles has a sustainability plan in place. At the time of writing they are in the process of establishing a new treatment plant for their end-of-line effluent, as well as satellite water treatment plants within the production process. In the indigo dye and printing areas they already have two treatment plants in operation. Their final goal is to ensure by May 2020, all effluent is treated to achieve acceptable water quality, which can be used for irrigation of local community lands. Da Gama Textiles is also in the process of installing a biomass boiler, burning wood chips, which would drastically reduce their reliance on coal for steam generation, resulting in a reduction of harmful air emissions.

Da Gama Textiles is an equal opportunity employer, maintaining ethical standards of production. They have introduced this profit-sharing plan with employees: 45 percent of shares in the company are owned by The Da Gama Employee Owned Trust, and all employees are beneficiaries of this trust. If the Board of Directors declares a dividend, the trust will receive a distribution, which will flow to the beneficiaries.

European culture, including shweshwe, was forced on the colonized South African indigenous population, but in spite of its roots, this fabric is so deeply connected to the culture of modern South Africa it has now evolved into an iconic, national folk fabric. I am thrilled to introduce Three Cats Original Shweshwe to sewing enthusiasts all over the world, both through my online shop and through my travelling trunk show presentation, so we can all continue to enjoy this heritage fabric and help to develop an export market to be part of the initiative to provide employment for more South Africans.