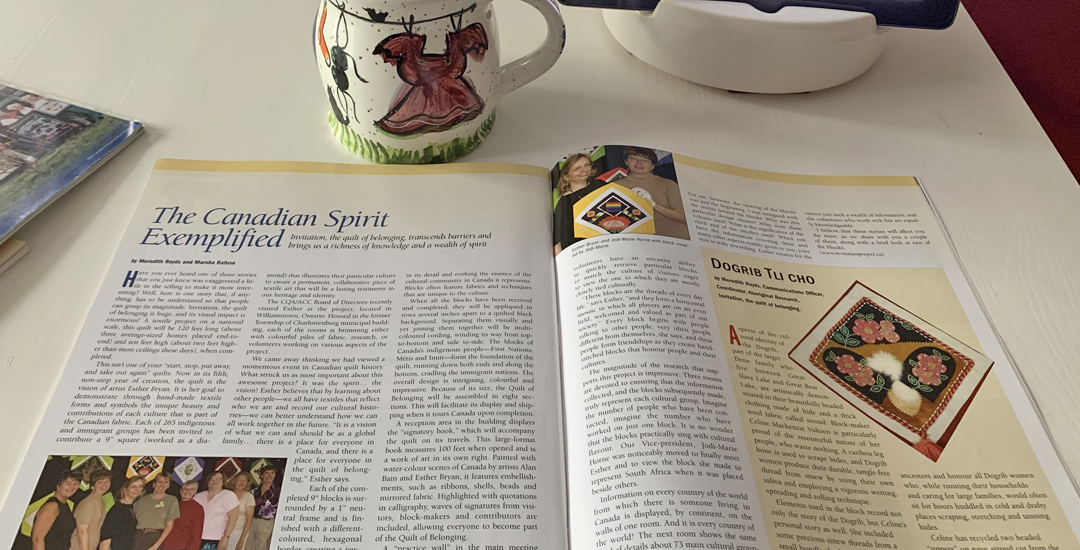 Looking Back Through the Archives: 2002 to the Present

In my first article about our newsletter and magazine archives, I mentioned that every time I opened up a new issue, I found more and more treasures. And that is just as true for the second half of our history. I couldn’t believe all of the beautiful quilts and patterns, guild news from across the country, tales of generosity in times of difficulty, and just everyday “newsiness” that made up each issue, four times a year, year after year. Our editor, Marsha Cleveland must have known, or known of, every quilter from sea to sea to sea. 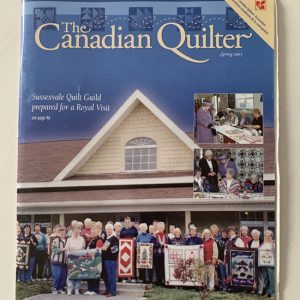 In 2003, Canadian Quilter was delighted to share the news of the Sussexvale Quilt Guild’s visit from Queen Elizabeth.

Here’s a peek at 2003. The four themes – one for each issue – included Guilds, Tools of the Trade, UFOs, and Quilting Ts: Tips, Tricks, Techniques. As well as submissions on those themes, there were so many other interesting articles. Being a fan of Downton Abbey and The Crown, I loved the article about Queen Elizabeth’s visit to the Sussexvale Quilt Guild in Sussex, NB. That must have been quite a day! The Winter edition caught my eye with its cover photo of quilters in Abbotsford and the quilts they made for forest fire victims in British Columbia. Quilters are so generous and quick to jump in, kindly using their talents to comfort and help in times of need. And inside, the inspiring story of Esther Bryan and her vision as she created Invitation, The Quilt of Belonging. She invited 265 Indigenous and immigrant groups to create a nine-inch square to illustrate their culture. This quilt has very recently been on display in Hamilton and Brantford, ON.

Fast forward a few years to 2010. Look at those covers! A landscape, stained glass, traditional appliqué and a whole different appliqué technique for that parrot. The Winter issue is chock full of Canadian content, ads for shops and retreats, guild and regional representative reports, and then more diverse articles. It also has information about a tour to South Africa and a photo of hand-embroidered Mapula cloth. Opposite it, an article and photo from the London, ON, International Quilt Festival 2010 with the Quilts of Gee’s Bend. 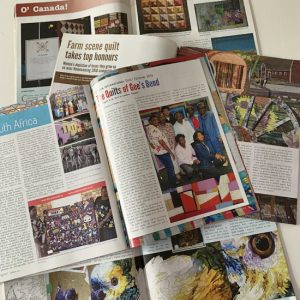 Articles like the one about the quilts of Gees Bend in 2010 help shine a light on international quilters and trends.

2013 was Marsha Cleveland’s last year as our newsletter editor. She announced her leaving in the Spring issue, said goodbye in the Winter issue, and kept us informed and entertained in between with every-thing from fun pincushions, to modern quilting and, without any hint of irony for the times we’re in, an article titled Virtual Groups â€“ an oxymoron or a benefit to the isolated quilter?

In 2014, Marcy Horswill stepped into the role and stayed with us until just this past summer. I don’t know about you, but I love to read the editor’s messages. After a few issues, I feel like I have made a new friend, even if there isn’t the remotest chance in the world that we will ever meet in person. (Happily, I have met Marcy quite a few times, but long after I was reading her columns.) I love the photo of Windswept Snow by Tracey Lawko. Winter is a favourite season of mine and I have the pleasure of knowing Tracey through our Toronto guild. I’ve also seen Tracey’s work up close and personal at a number of galleries and quilt shows.

The more recent years of the magazine are more familiar to me as I joined the Board in 2018. Quilters names are familiar and the events are ones that are in my agenda, too! The Winter 2018 article about Laura Coia of Sew Very Easy was a fun remembrance of attending her photo shoot for Zoomer magazine, representing the Canadian quilting community and CQA/ACC. 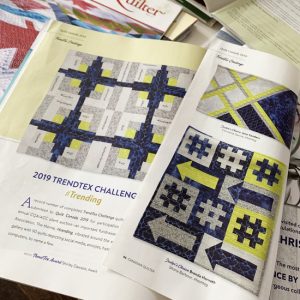 A regular entry over the years has been photos of the TrendTex Challenge quilts and the photos in the Autumn 2019 issue are just a few of the entries that I received that spring, as I was the coordinator, fabric shipper, receiver, judging coordinator and logistics manager charged with getting these quilts to Ottawa. You can’t imagine how much fun it was to open my mail – Christmas and birthday rolled into one!