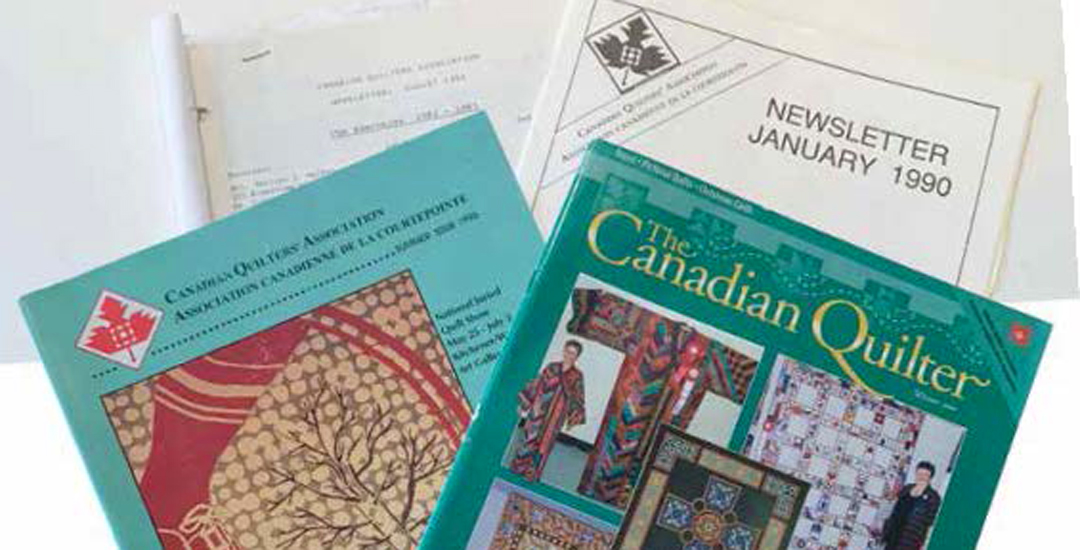 As we approach our 40th Anniversary I thought this might be the perfect time to look through our collection of newsletters, magazines and show catalogues and share some of the highlights and headlines with all of you.

But wait, will we be celebrating our 40 years of existence or has there been a mix-up? Articles on our website say that the Association was formed at Quilt Toronto in 1981 and incorporated on April 14, 1983. But another source, the August 1982 newsletter, says CQA/ACC was officially born on May 19, 1982, when the first executive was elected and the constitution approved. So, 1981, 1982 or 1983?

A little more research turned up a two-page History of the CQA/ACC article by Dusty Newey in the Winter 2001 issue of The Canadian Quilter. I think it lays to rest the question of our founding date. Dusty wrote that in May of 1981, quilters from all over Canada met at Glendon College in Toronto, ON, for Quilt Toronto. That evening, a number of quilters gathered to discuss forming a national organization; a motion was unanimously passed and $10 membership fees were paid by 51 people. So, there you have it – birth date May, 1981, 40th Anniversary coming up in 2021!

The first newsletter of August 1982, six pages long, lists the Executive Committee and Regional Representatives – Marilyn Walker, Kay Phillips, Margaret Walpole, Nina Stahlschmidt, Shirley Gracie, Eunice McLeod, Phyllis Brown, Ruth Matthews, Ann Bird, Betty J. MacDonald, Marilyn Strothers, Patricia A. Good and Michele Boon. There is a message from the President, various other articles of interest and an announcement of the logo contest which was open to all members. The winner, Eunice McLeod, was announced in the July 1983 newsletter. A few other notes of interest from that edition include mention that the Brandon Hills Busy Bees celebrated their 67th anniversary, having formed in 1916, and 215 delegates attended Quilt Canada ’83 hosted by the Ottawa Valley Quilters Guild. These earliest newsletters continued to be six to eight typed pages and the first Advertisers’ Corner appeared in July 1984.

In 1987 the CQA added Association Canadiens de la Courtepointe to its heading and articles started to appear in French and English; translation of the Association’s name was approved by the Commissioner of Official Languages. The Dorothy McMurdie award was established and it would be presented for the first time at Quilt Canada ’88 in Calgary.

In the 1990s the newsletter began to look like a magazine, incorporating photography, glossy paper and a new name, The Canadian Quilter. It grew to 60 or more pages including full page ads from Janome, Husqvarna, Bernina, Pfaff and Elna; membership grew to over 1,000. There were many editors over the years, but Marsha Rafuse began a multi-year stint in 1998.

Every time I opened a different newsletter or magazine, I found new and fun articles that would take pages and pages to tell you about. It was great to see an article about Quilting on the Internet in the Summer 1995 issue, and in that same issue an advertisement for a seven-day fall foliage cruise for $995. Fast forward to 2020 and we’re almost all on the Internet and using screens almost all day for work, meetings, exercise, and quilting, of course. And, even though we’re not likely venturing onto a cruise ship any time soon, today that cruise might cost $10,000. If only I had had $1,000 to spend on a cruise in 1995!

We hope to share this abundance of our history with you at Quilt Canada 2021, on, yes, our 40th Anniversary.