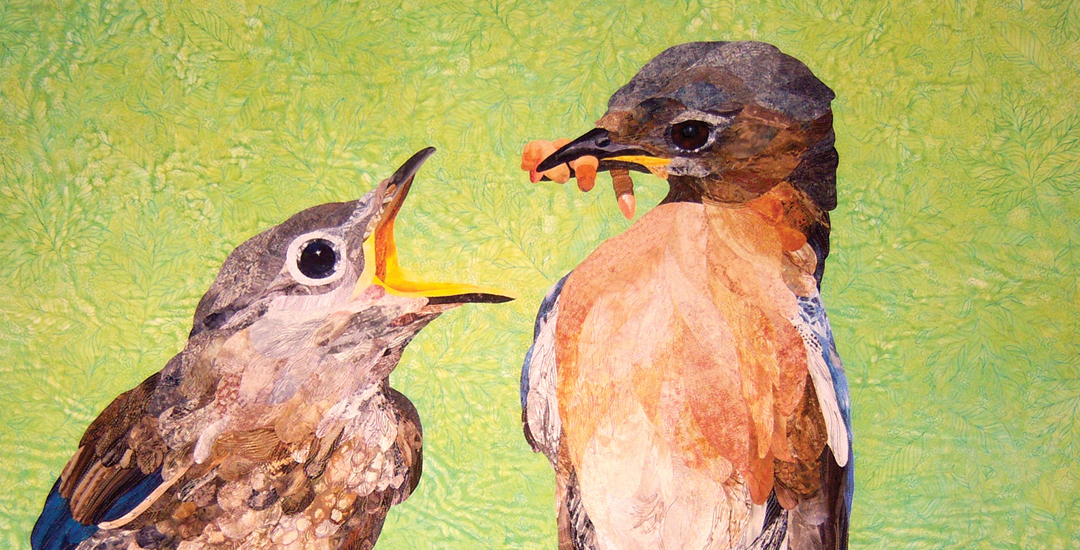 A conversation with David Taylor
|
Winter 2018

David Taylor is a workshop teacher and guest lecturer at Quilt Canada 2019. Take a few minutes to get to know this delightful, award-winning quilter who is travelling to Ottawa in June. 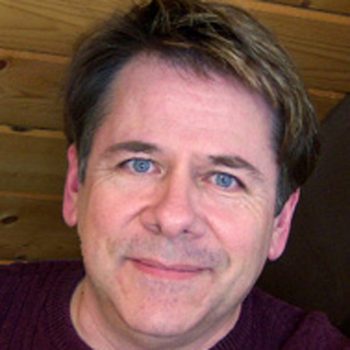 When and why did quilting become a passion for you?

My love affair with fabric began at an early age. My mother taught all six of her children how to sew on her 1967 Sears® Kenmore® sewing machine. I created my own costume for Halloween at ten years of age. I managed to eke out a first-place win for my four-armed-monster outfit at my Cub Scout den meeting! My first attempt at a quilt was during high school, but the task seemed so daunting, I never finished it. I was making all my own clothes by the 1980s, so an appreciation for textiles had already taken hold. I always had a lot of fabric. At that time, I don’t think quilting by machine was considered a hobby for home yet. I determined that patchwork, appliqué and quilting were not crafts I wanted to pursue. I was happy making apparel and theatre costumes.

In 1998, I relocated back to Steamboat Springs, CO. A dear friend of more than 30 years, Madeleine Drake Vail, suggested I give quilting another try. She was sure I would enjoy it more with all the modern improvements – rotary cutters, acrylic rulers, appliqué and quilting on a sewing machine! I decided to give it a go.

Being very competitive, I started entering quilt competitions right away and earned some ribbons. After visiting a few major quilt shows, I realized I had a long way to go and started honing my new-found craft. I discovered a desire to learn more. Precision in craftsmanship flourished with my OCD nature. In 2006, I won the Master Award for Contemporary Quilting for my quilt, Sally at the Window (precision piecing taken to the extreme), from the International Quilt Association (IQA) in Houston, TX. I was hooked.

What was your first quilt project?

My first art quilt was adapted from my own original drawing influenced by photographs by Tom Ross. Tom was a features reporter and photographer at the local newspaper where I was employed as a graphic designer. He was writing a seasonal article about the fall colour change and asked a few of our female coworkers to don feathered masks and interact with the aspen trees and the golden leaves. The idea was more romantic than the actual ‘woodland spirits’ photo shoot turned out to be and, ultimately, the images were not used. I asked Tom if I could have the discarded photos as inspiration for my own interpretation and voilà! – my first art quilt. I titled it Woodland Spirits: Autumn. It was completed in 2002 and won a second place ribbon at Quilt Colorado. It was machine appliquéd, hand embroidered, machine couched and machine quilted. Sadly, it was destroyed in a gas explosion and home fire that devastated my studio in 2016. 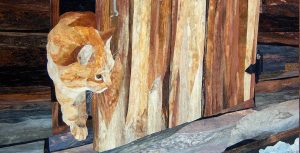 How do you approach a new quilt design? Can you explain a little about your process?

My creative process has frequently been kick-started with an emotionally stirring photograph. It must present a challenge to me: to recreate the image using fabric and thread. Once permission is secured from the photographer, it can take years before the project ever sees the light of day. I must understand the subject matter – the emotion and motivation within the image. Fabrics must be gathered – a lot of fabric! I create a detailed, hand-drawn pattern on exceptionally transparent tracing paper. The initial tracing is done very quickly and then, over a period of days, the lines and curves are refined and adjusted, so it can reasonably be translated into a manageable appliqué pattern. That pattern is re-traced onto freezer paper and from there I use a traditional, template-based, layered, hand appliqué method.

In 2006, I was fortunate to be able to attend a benefit for Doctors without Borders at Radio City Music Hall, New York City. The event was titled Harry, Carrie and Garp and featured book readings and interviews with novelists J. K. Rowling, Stephen King and John Irving. Three of my favorite authors. During the audience question and answer session, Mr. King and Mr. Irving were asked to describe the differences between their own creative processes. Mr. King described his process as pulling on a string and following its path to an unknown destination and being surprised and held in suspense as it meandered its way along the journey. Mr. Irving stated he begins by writing the last and first sentences, and then outlines the story by events, working toward his predetermined denouement. I refer to my process as a John Irving method of quilting. 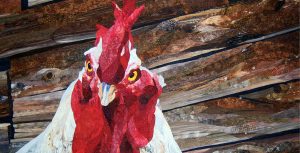 What subject matter inspires you the most?

Do you have creative challenges?

There was a period of time, starting in the winter of 2013, when I underwent hernia surgery, which was soon followed by heart-valve replacement surgery in the summer of 2014, and months of physical and emotional recovery, followed by the home explosion and fire less than two years later and a cross-country relocation. Whew. I seem to be waiting for the other shoe to drop, but I’ve been working to convince myself that life has settled down and it’s time to get back in the studio.

It is getting easier to look at my fabric stash. There is scorching from the fire on every piece of yardage – that reminder is not so easy to dismiss. I do think I’m ready for another challenge, but I would appreciate one that will bring me satisfaction, not sadness. 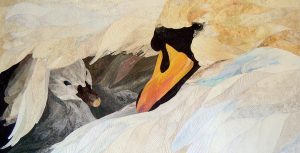 What path led you to become a teacher?

After winning my first Master Award from the IQA in 2006, I was approached by their education staff coordinator about a teaching post. I respectfully declined. At the time, I was a very content graphic artist working at an advertising agency. I still have a few graphic art clients and enjoy designing with computer software and building websites. After winning a few more awards at quilt shows, IQA approached me again in 2009. I had taught a few classes for local guilds in Colorado and Utah and became an ambassador for HandiQuilter® and their Sweet Sixteen® quilting machine that same year.

Looking back, I had no idea what I was doing at the front of those classrooms, but I managed to make it work. I sincerely hope students learned something at the workshops and my absolute terror was well concealed. Always up for a challenge, I overcame the fear and worked harder and smarter. I quit my day job and learned to balance my travel schedule with freelance design clients. It became apparent where my career path was headed, and I started teaching and speaking fulltime by the middle of 2010.

I will add that I have only taken a few workshops from other instructors, none of which focused on appliqué or the quilting process. The best lessons I received were from my muse, Madeleine, and my creative guru, Ellen Carlson. For more than a decade I also received much encouragement, support and advice from the Wednesday quilt group at the United Methodist Church in Steamboat Springs. Patchwork and quilting are team sports. 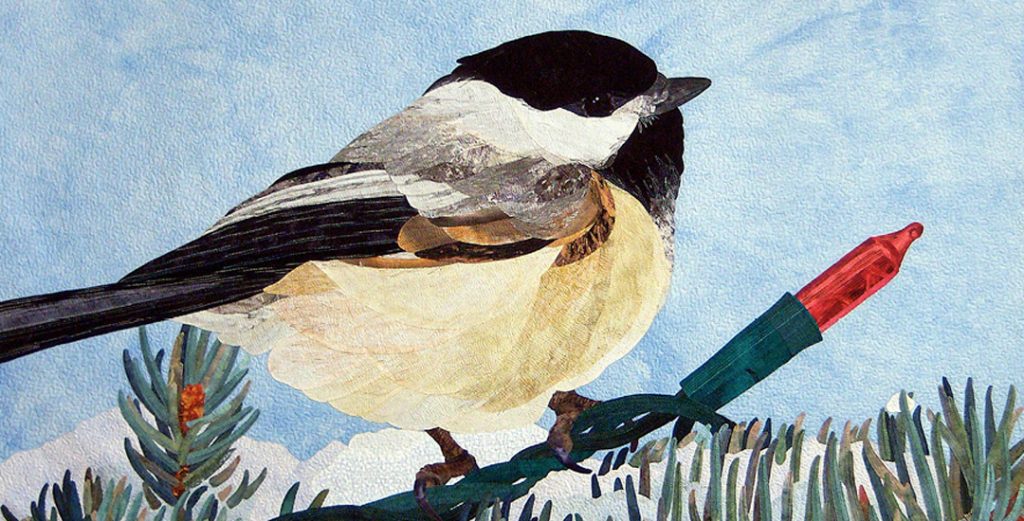 You travel extensively to teach. How do you balance teaching and working on quilts, or, how do you find time to be creative?

It’s been more than a decade since I launched my first website and started traveling the circuit of quilt guilds and festivals. Similar to most instructors, I manage my own working calendar. In those early years, I would always block off three months of the year to stay home in the studio. Eventually that time was devoured by even more travel requests. It’s very difficult for me to say no to an event. There is a lot of satisfaction in seeing a student achieve something they were not sure they could accomplish. I truly enjoy delivering my lecture about my work and the laughter from the crowd at quilt meetings always brings me back for more.

With my limited studio time and life challenges during the past four years, it’s been a perfect storm to keep me out of the studio. Soon, I hope I’ve recovered enough and I am responsible enough to be able to get back to the design wall and start fondling my fabric again.

Are you looking forward to taking part in Quilt Canada 2019?

I have many friends in Ontario and Alberta and traveled north of the US border for several years. While visiting friends in Sarnia, in 2017, we took a day trip to Toronto to Quilt Canada. Luckily, I was at the right place at the right time and started to secure a teaching spot for 2019, in Ottawa. I was once a guest lecturer and teacher for a guild in Ottawa – I am so looking forward to a return trip for this major event. I’ll get to spend time with good friends and quilters, John and Lynn Mills, and hopefully see all of my Canadian quilting friends while I’m there. I will be teaching workshops and my lecture is titled, Uniting my Nations: Imagination, Determination, Procrastination.

Do you have any advice for quilters taking one of your workshops?

The first item on any supply list for one of my workshops is to bring a smile. And lots of fabric.