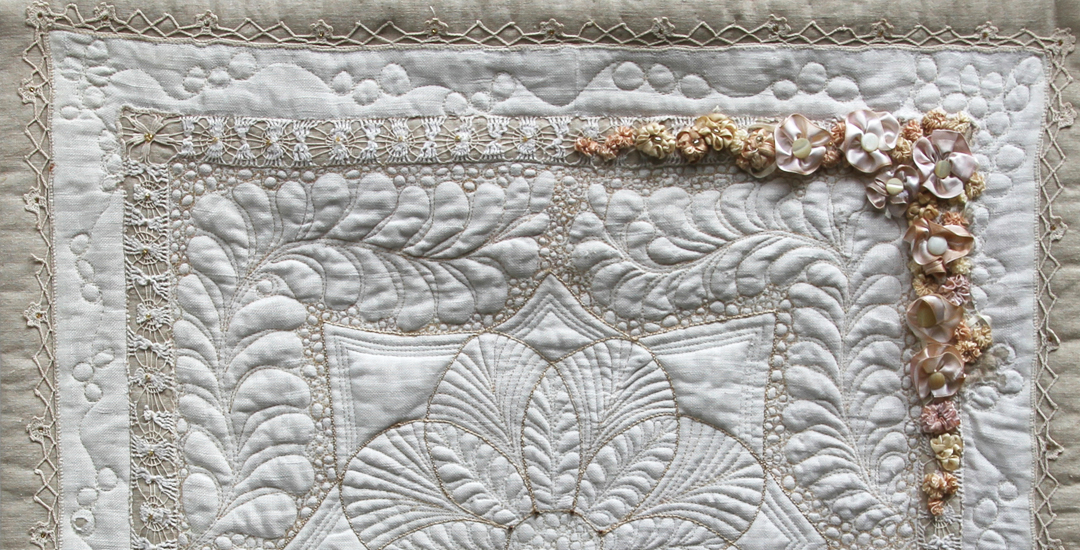 I am Hope.  I was conceived by an immigrant maid in 1930. She spoke little English and lived in the servants’ quarters of the home in which she toiled. Sara didn’t have extra money for luxuries but, in the old country, her family had enjoyed many nice things. Until the war. The young maid did not like to think of the hardships and terror of those times. Fear. Hunger. Survival. Her father murdered. Three sisters dead. Her mother and five surviving daughters were fortunate to come to Canada. Russia was behind them and they had begun anew. Starting again, with nothing but hope. 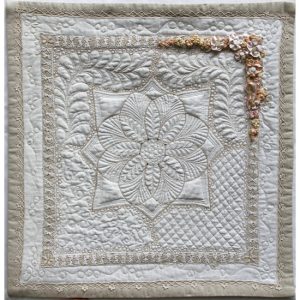 Hope is where I come into the story. I suppose I represented a better future, not that I started out as much. I was a simple off-white linen, shelved at the local general store. There were more expensive fabrics and laces from which to choose. I like to think she recognized my potential, rather than being all she could afford. A few coins changed hands. Sharp scissors separated me from the rest of the bolt and the tiny blonde brought me home.

At first, we didn’t do much. I was alone during the day, but we would sit quietly together in the evenings until the natural light faded. One evening, her work-hardened hands started pulling some threads. This was a bit startling, but she was gentle and my fibres quickly separated along one side. It didn’t hurt and I was more curious than anything about what was happening. My fine strands were loosened and then knotted. It took a while but, gradually, shapes and patterns were created.

My metamorphosis took some time. Sometimes my partner was tired so we would sit and relax and enjoy the quiet. Other times, she would work until the light failed. A crochet hook gradually added florets to the corners and hemmed my outer edge. Sara was changing as well. She became more confident and, as I blossomed, so did she. Intricate knotted strands followed my edges, as intricate as the finest lace. I was elegant and when Sara looked at me, she did so with pride.

I enjoyed a place of honour in that plain room. I was quite shocked when one day I was carefully folded and shut up in a box with a few other items. Without the benefit of day and night, it was impossible to know how long I was trapped. When the box opened, all had changed.

Sara and I had moved to Sonningdale, an unlabeled speck on the Saskatchewan map. We now lived in a log cabin and I was placed in a position of prominence, covering the treadle sewing machine table in the main room. Sara had married Henry – a reluctant farmer who had been an academic in the old country. They were a good pair and I was proud of my strong, hard-working maker. I was still the grandest occupant of the home but I had new companions. My best friend was the clock, a wedding present who had made the trip from Russia with her family and who now sang to me. As children arrived every other year, our small cabin bustled with activity. From my lofty vantage point, I watched proudly as my family grew.

I should have seen it coming but had grown complacent in routine. Henry and Sara had spent weeks with their heads together at the dining room table, but I had been busy in discourse with the clock and had not paid close attention. Sara knew that for the children to have more opportunities we all needed to move. I watched items disappear from the home for weeks – sold or given away. I wasn’t concerned. I knew Sara would not leave me behind, but was relieved when I watched the clock get carefully packed for travel. I had not been so confident about him. 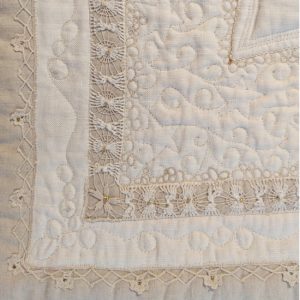 Our new home was a farmhouse in Leamington, ON. I reclaimed my position in the centre of the house, beautifying the sewing machine table in the dining room. The clock also survived the move and he again sang to me every 15 minutes, with a full serenade on the hour. The six children grew and, one by one, they left, coming home for holidays and visits. Sara’s hair went from yellow to white and I went from white to yellowed. We both grew wrinkled and thinner and my skin started to break. Some holes developed and my beautiful crocheted flowers tore. One day, the clock stopped singing to me. I missed his voice. I napped for long stretches as Sara seldom used her sewing machine anymore. Infrequently, the house would explode with activity as the children – grown now – returned with spouses and their children. I paid little attention. As I faded, I lost track of the next generation.

I awoke from one of my prolonged slumbers to a swell of activity. My friends are removed from their comfortable stations and disappear. My dear companion, the clock, is pulled off the wall and taken away. I am folded and placed in a shallow cardboard prison, alone. The lid closes.

When I next see light, the face peering at me is vaguely familiar. It takes me some time to realize it is Sara’s older daughter. Gray hair and wrinkles disguise the child that I had watched grow from infancy to adulthood. We sat and got to know each other again. She admired my carefully knotted edges and examined the injuries I had accumulated. Together, we contemplate my tattered beauty and remind each other of younger times. I start to feel like Hope again. 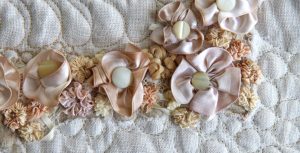 Eventually, we came to an agreement and I was smoothed into my former shape. My fragile skin was grafted onto a healthy linen for support. My scarred edges were carefully approximated and pinned. I was introduced to the sewing machine and the daughter carefully worked on me, much as her mother had done so many years before. Where Sara had worked with a hook, the daughter used her machine, but with no less love and attention. Her careful stitches created textures and patterns across my surface. My wounds were sutured and covered with beautiful floral bandages.

I am no longer a tablecloth. I am a beautiful art quilt, hanging in the heart of my new home. From here, I watch over Sara’s daughter and her children and grandchildren. I am Hope. Reincarnated. 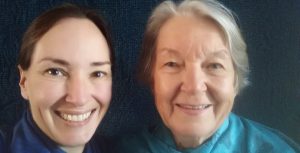 Sara was my grandmother. My mother, Elfrieda Snow (R), created the beautiful art quilt Hope. This story about my grandmother’s life through the eyes of her knotted linen tablecloth is my contribution to this multi-generational creative effort.