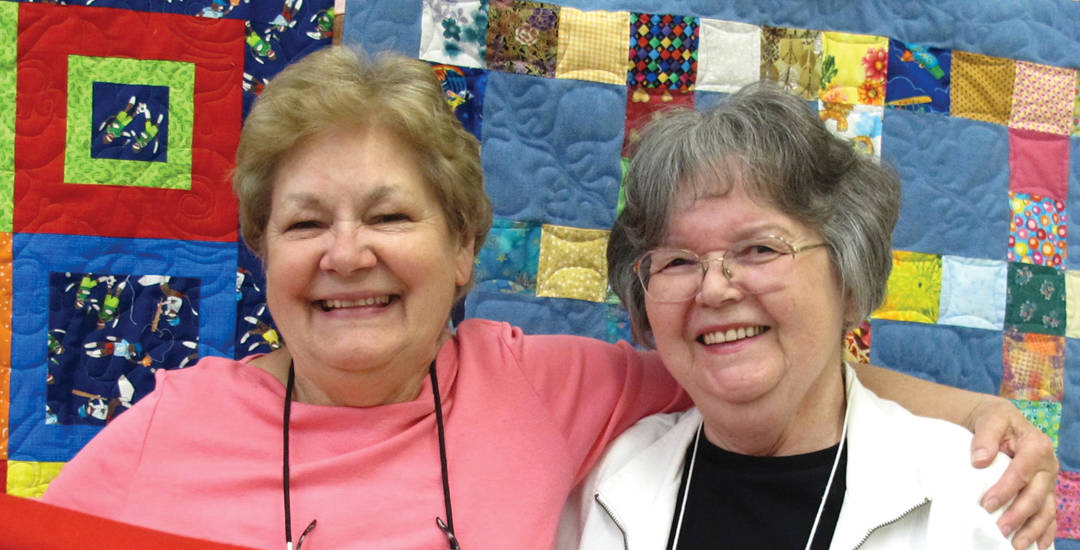 2019 was a special year for the Chinook Guild of Fibre Arts (CGFA) in Calgary as they celebrated their 90th anniversary. While the years brought many changes to venues, guild structure and even the guild name, the purpose remained the same: to preserve the skills of quilting, traditional rug hooking, knitting, embroidery and other types of needlework, and to provide information and education about them.

The guild offers learning opportunities like workshops and trunk shows for members and member guests, as well as resources like books and materials. They exhibit work in fibre-related community events and a number of charities benefit from donations of handwork and fundraising. Not the least of guild goals: to enjoy each other’s company while sharing a passion for fine textile arts. Many long-lasting friendships evolved over the years.

Currently CGFA has 225 active members who meet weekly or bi-weekly in three groups. Monday’s group focuses on quilting, while the rug hookers and needleworkers get together every Wednesday. A multidisciplinary group meets the second and fourth Thursdays of every month. All members are welcome at every meeting, no matter the discipline practiced. Many people are active in more than one group. 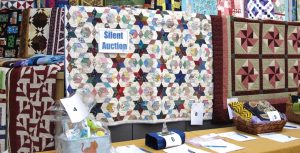 CGFA’s roots go back to the turn of the 20th century in Canada, when it was feared traditional needlework skills would be forgotten as homemade clothing and household goods became replaced by cheaper, factory-made items. In 1902, The Canadian Handicrafts Guild was established in Montreal to preserve the crafts of early settlers and Indigenous peoples. In 1927, a Calgary group was formed with a similar purpose. 1929 saw the official beginning of today’s guild when The Calgary Arts and Crafts Club added Canadian Handicrafts Guild, Calgary Branch to its name.

Meetings included lectures on a wide variety of art-related topics held in different venues such as private homes, libraries and churches. In 1931, the guild organized an exhibition in a space donated by the Hudson’s Bay Company® inviting craftspeople from Alberta and British Columbia to participate. Amazingly, 2,500 items were submitted, displayed and safely returned – a massive feat! Meetings were formal in those days: the ladies dressed in their best, complete with hats and gloves, and no one dared to address a more senior member by her first name unless invited to do so!

By 1968, affiliation with the Canadian Handicrafts Guild ended and the Alberta Handicrafts Guild (AHG) began with branches in Calgary and a number of other cities and towns within the province. The guild’s frequent search for new meeting venues was solved when the Calgary Public School Board offered spare classroom space (starting at a mere dollar per year!). However, by 1986, the quilting group became too big for a classroom and found space to rent at the Rosscarrock Community Hall in southwest Calgary, where all three groups continue to meet. In 1988, before CQA/ACC took over the annual national meeting, AHG hosted the Canadian Quilting Conference at the University of Calgary, becoming the first host guild to make a profit.

While CGFA members enjoy making elegant quilts and other items for their families and friends, they also have a long history of supporting charities. Their generosity began during World War II with knitted socks and sweaters for servicemen. Today the quilts and other textile articles the guild produces each year number in the hundreds. In the past year, members made and donated 301 Quilts for Kids to the Children’s Cottage (a residential shelter for children at risk) and the Alberta Children’s Hospital Child and Adolescent Brain Health Unit, where patients choose a quilt to use while in the hospital and take home afterward.

The guild also made 390 quilted toiletry bags for women’s shelters and 31 quilts for Quilts of Valour – Canada Society™, as well as fidget aprons for local nursing homes. Caps, mittens, sweaters, shawls and blankets are among the knitted or crocheted items donated to various charities and in the past CGFA members produced up to 800 placemats per year for Meals on Wheels. Never ones to waste a scrap of cloth or yarn, last year the guild sewed and stuffed 80 dog and cat beds for the Cochrane Humane Society to distribute to people adopting pets. 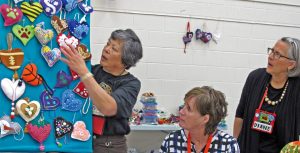 Raising financial support for the guild’s charity projects is always a challenge. In 1973, the AHG benefitted from the Canadian government’s New Horizons Project for groups involving seniors after applying with the aim of preserving pioneer heritage. It was difficult to find ten senior members to sign the grant proposal, as none wanted to admit they were 65! The guild obtained charitable status in 1977, allowing it to apply for grants to buy equipment and to update its library. This step involved hiring an accountant and paying income tax, so in 2012, the guild reverted to operating as a not-for-profit society. This necessitated changing the name again, thus Chinook Guild of Fibre Arts.

Much of the guild’s funding for charity projects is generously provided by various service clubs like Rotary, Shriners, Lions Club and the Tuscan Benevolent Society, as well as local businesses. Some longarm quilters donate services or finish charity quilts at a fraction of the usual charge and the guild is the grateful recipient of stashes from people who give up quilting. The monthly “sale days” bring in more funds, as members donate cloth, threads, yarns, patterns and books they no longer want. Every April, the guild holds Spring Fling, a festive day to thank benefactors by inviting them, along with friends and representatives of receiving organizations, to view charity projects. The meeting hall is hung with hundreds of colourful quilts and other handmade items, refreshments are served, speeches made and several auctions provide lighthearted entertainment, while adding to charity coffers. 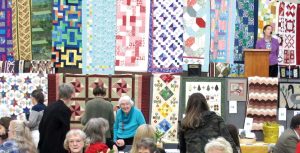 Besides weekly show-and-tell at meetings and impressive displays at the annual spring luncheon and Heritage Park’s Festival of Quilts, CGFA recently put on three special shows.

To commemorate Canada’s 150th birthday in 2017, the multidisciplinary exhibition Women’s Hands Building a Nation opened and traveled widely for 18 months. Its 54 pieces celebrate women’s contributions to Canada’s growth. To honour the guild’s own 90th anniversary this past year, many members made small diamond-themed quilts, while the rug-hookers hooked 33 mats for an exhibit titled, Rug Riot: Come to the Party.

Thanks to the energy and creativity of its members, Chinook Guild of Fibre Arts is thriving and already looking forward to the 100th birthday!