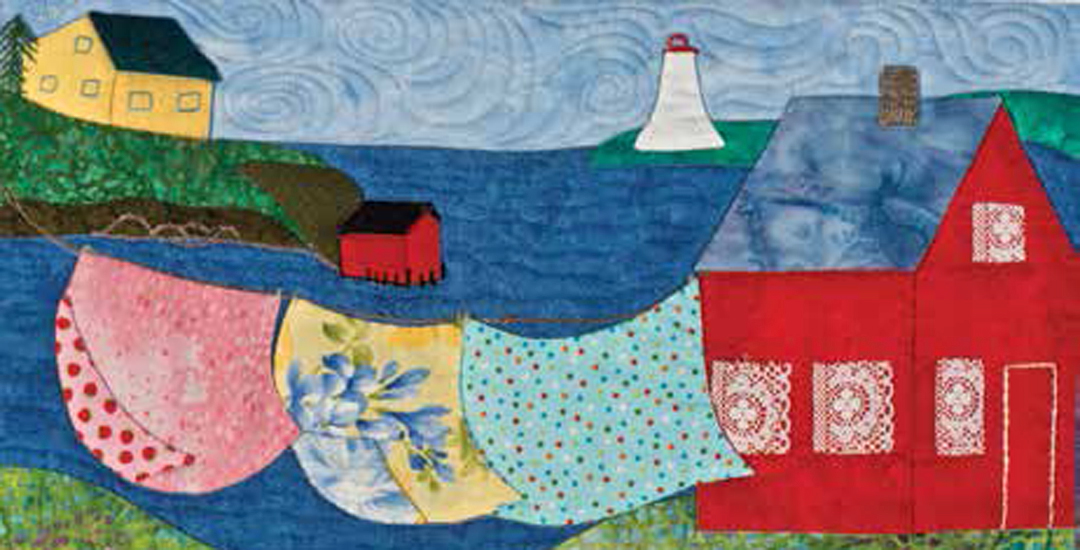 On the morning of Friday, April 17, 2020, my long-time friend, Nancy Guest, called me from Chester Basin, NS. Nancy and I don’t connect as often as we did before she moved out east some years ago. Time slipped by, but for some reason she was in my thoughts all that week. I was concerned about her, wondering how she was coping with the coronavirus which is impacting all our lives, given that she is widowed now. When I spoke to her on that Friday morning it felt as though there was some energy moving between us; some reason for her call. After that weekend, I knew why. 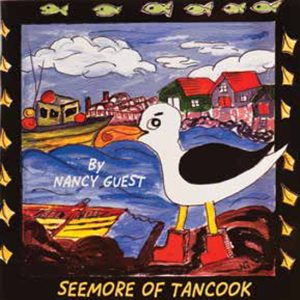 Seemore of Tancook is a children’s book, written and illustrated some years ago by Nancy, whose home overlooks beautiful Mahone Bay where she and her husband, Don, a school chum of my late husband, Bob Small, used to boat out to Tancook Island. I have a copy of her book here in my studio and when we spoke that day, she again wondered if I might ever design a quilt inspired by Seemore. On Saturday, I reread it, still not finding enough visual material to create an entire quilt design from it and called Nancy back on Sunday morning to let her know. Unbeknownst to us both, 50 minutes away from Chester Basin, as Nancy and I were talking, a horrible tragedy was unfolding. 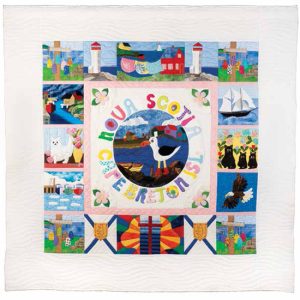 Longarm quilter Mary Light is an artist in her own right, adding beautiful finishing touches to highlight different aspects of the quilt, like the flowing lines of the borders that echo the waves lapping upon Nova Scotia’s shores.

Twenty-two lives were lost in the deadliest rampage in Canadian history. That weekend, Gabriel Wortman, impersonating a police officer, committed multiple shootings over a 13-hour period in Portapique, NS. The impact of this tragedy has not only been felt by the families who have lost beloved family members, but by friends and Nova Scotians alike. For me, it brought back the day when I, too, learned of my late husband’s death by a gun shot. The feelings of shock, disbelief and devastation are something one never forgets. Somehow, I felt this is why Nancy and I were meant to connect that weekend.

I have been quilting now for 60 years. I don’t claim to be old, but 60 years means I made my first quilt at the age of 22. I taught quilting for nine years, formed Canada’s second quilt guild – the Etobicoke Quilters Guild – in 1975, and conceived of and co-convened our first Canadian Quilt Conference in 1977. I have a long history with quilting and quiltmakers. I also know that in times of both joy and great sadness, we have to keep our hands and minds busy making a quilt. I thought then of Seemore, that mischievous seagull who, when I look at him, brings a smile to my face, and wondered if he might do the same for others. So I called Nancy back on Monday morning, asked for her permission to replicate, by hand, her book cover illustration. She agreed. Thus, began my research for a Nova Scotia memorial quilt.

Having been to Nova Scotia three times, including visits to Chester Basin and St. Peters, Cape Breton, I wanted to create a quilt that reflected how I saw the province. The images that I chose were all drawn freehand, taken from the internet. When I draw a design from an image, a photograph or a picture, not all visual information is included. I look at an image and decide what it is that attracts me to it, what I like about it, what I want to take from it; it has to be both versatile and blend with other elements, both in scale and design. I generally base my designs on a queen-sized bed top; the borders people can add as needed. And so began six months of drawing, designing and creating Seemore with that naughty gleam in his eye, the surrounding circle (where quilters could either place the lettering or leave empty for some fancy quilting), and then choosing images for the surrounding blocks.

The block on the left was is inspired by Nova Scotia artist Sylvie Boisvert and her paint by numbers series.

There are three sheets of design images, the first being the centre section of the quilt. The other two contain the surrounding blocks which include several additional designs should quilters wish to use them. A design to replace the memorial block, should this not wish to be used, is also included.

Designing and making this quilt gave me purpose in the midst of COVID-19, thinking of those whose lives are now lost. I hope this quilt may honour their memory. It is my intention to donate this design to seven Nova Scotian guilds two have already received their patterns… the Sackville Threaders and the Halifax Mayflower Guild. In addition, it is my intention to make a financial contribution to one of the Portapique recovery efforts in some way, so if you are interested in purchasing this pattern, it is available for sale online for $49 (includes shipping and handling; add $25 for courier delivery). If you have any questions, please do not hesitate to email me at  or call 1-519-942-1775. 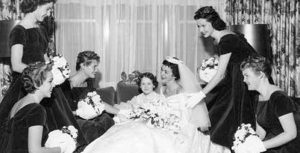 Sandy and Nancy have been fast friends since the age of 16 and were in each other’s wedding party. Nancy is standing behind Sandy, her arm outstretched.