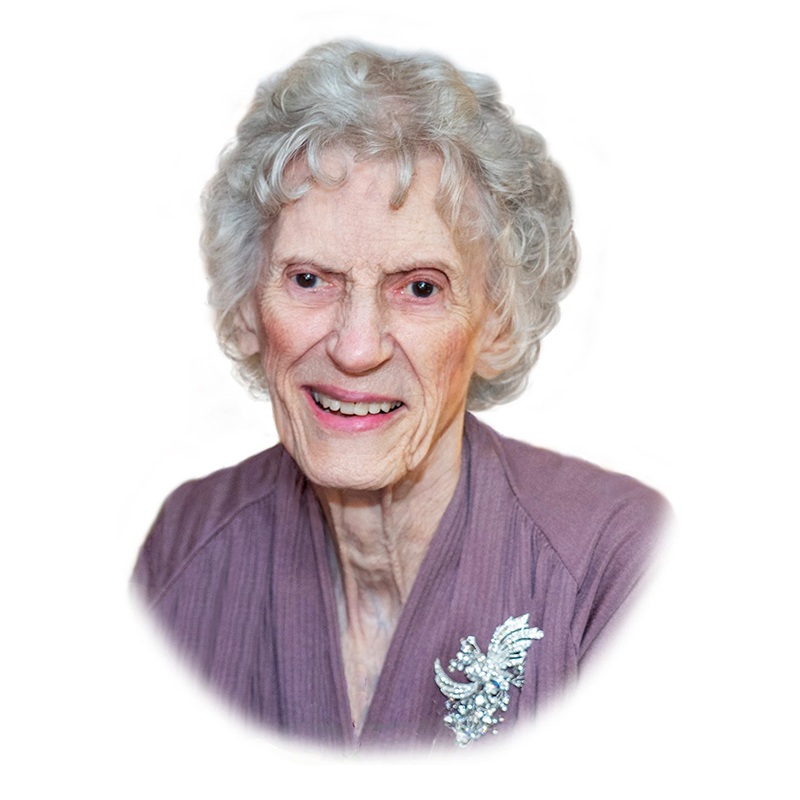 Betty E. Ives, a charter member of CQA/ACC, passed away on June 3, 2022, after 94 years of creative adventures. She was an award-winning quilt maker, teacher, lecturer, and fibre artist whose works were exhibited all over the world. 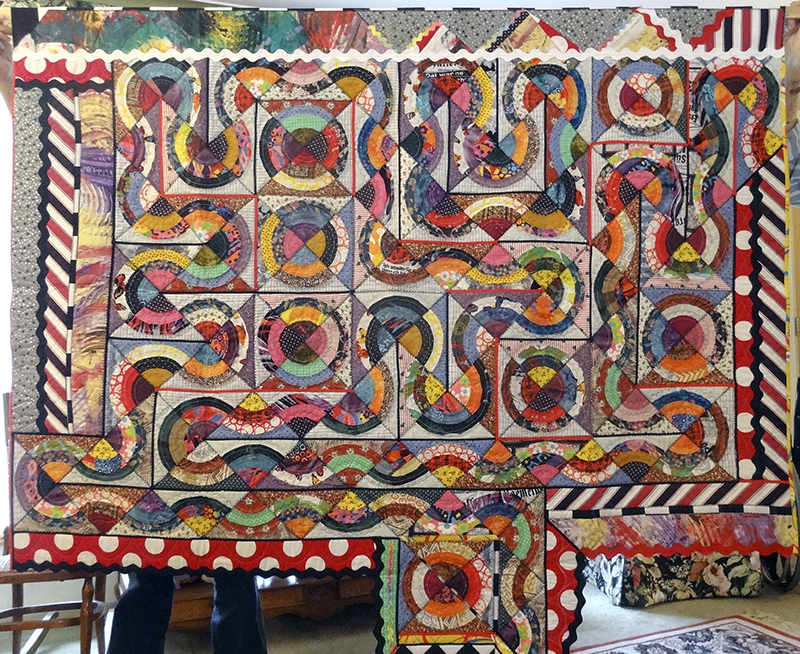 Pathways to Peace by Betty E. Ives. This quilt was accepted to hang at the Winter Olympics in Salt Lake City, 2002.

Raised on a farm in southwestern Ontario, Betty learned millinery in the 1960s. As her daughter, Kathryn Rutherford, explains: “In addition to making all her own clothes, and almost everything her family wore, Betty made hats. Lots of hats!”

Betty worked in a print shop, was a telephone operator, and a radio dispatcher, working to earn her own spending money, which was a rarity for women and mothers in the 1960s. She took sewing and interior design classes at night while raising her family, and studied cosmetology in 1977, something Kathryn discovered only after finding her graduation certificate.

In her late 30s, Betty became a licensed insurance agent, and later taught quilting classes at St. Clair College, always keeping her money in what she called her working bank account: “It’s money I made from working.” Kathryn found out that a year before she passed away, Betty had closed the account and put the remaining funds into an envelope marked: “The last of my teaching money.” The envelope held $1500 in 20s, 50s, and 100 dollar bills.

At one point in Betty’s quilting career, she discovered the freedom of art quilting. No longer confined by the restrictions of “perfect piecing”, she became a front-runner in the art quilt movement.

Betty and her husband loved traveling. When her quilts were shown at international exhibits in eight countries, she always visited the country and attended the shows. 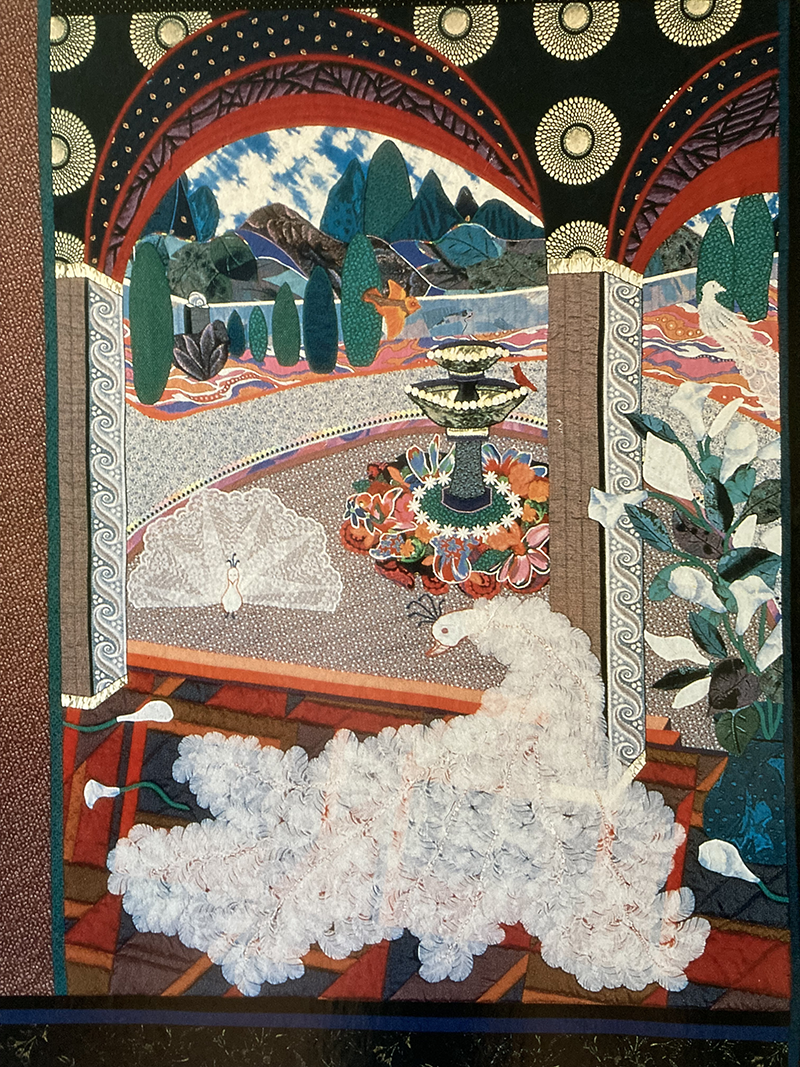 Peacock Paradise by Betty E. Ives. Featured in the posters for the Gardens and Greenery Exposition in Osaka, Japan, 1990.

Betty was the Canadian Invitational Artist at the Gardens and Greenery Exposition in Osaka, Japan in 1990, and her quilt, Peacock Paradise, was featured on the posters for the event. Another of her quilts, Pathways to Peace (shown above), was accepted to hang at the Winter Olympics in Salt Lake City in 2002.

Kathryn tells us that in later years, Betty took classes in raw-edge piecing, and after mastering the technique using her own dyed and hand-painted fabric, taught the technique to others.

We are grateful to Kathryn for letting us know about her mom’s passing, and for sharing so many memories with us. After a 46-year quilting career, Betty is fondly remembered by quilters and quilting students in Canada and beyond.

Jean Hillis, president of CQA/ACC in 1986-87, remembers Betty as a good friend of Dorothy McMurdie, “the driving force behind the formation of the Canadian Quilters Association” when it was formed in 1981. “Betty was a free spirit, ahead of her time, introducing new materials and techniques into her work. … The Canadian quilt world has lost one of it pioneers.”

Kay Phillips met Betty in the early 80s, “at the first meeting of the formation of CQA”, and also remembers her as being ahead of her time. “I still remember how many of us were totally in awe of her Puttin’ on the Ritz. I visited her home several times, and always came away filled with new ideas Betty shared so excitedly with me. Her life was filled with all the beautiful things that she created.” 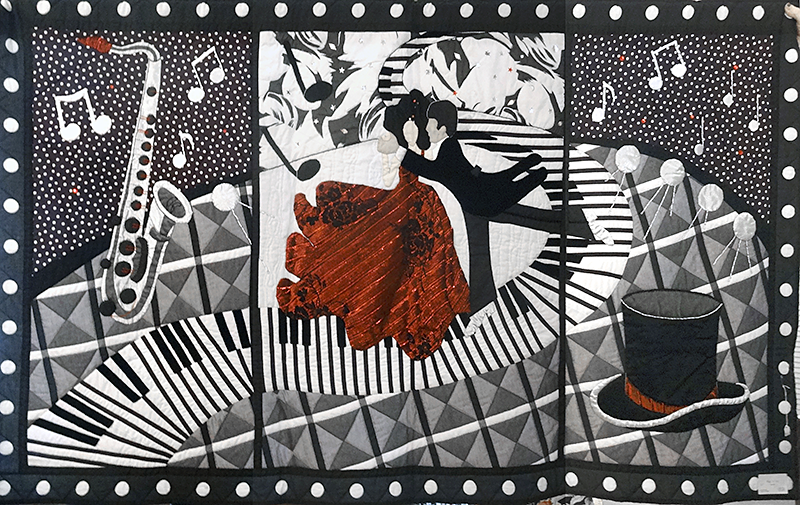 Puttin’ on the Ritz by Betty E. Ives.

Some of those beautiful things will now be displayed in the 1840s manor home Kathryn and her husband are restoring in Indiana. “The Red Box Exhibit will hang over the fireplace in my parlour studios,” she says. And, Puttin’ on the Ritz will hang in their music room, as Kathryn explains, “partially because I love it, it’s an award-winner, and partially because the 3D reflective red and black velvet fabric of the woman’s dress was my contribution to the creation. It was textile left over from a Christmas gala gown I made.” 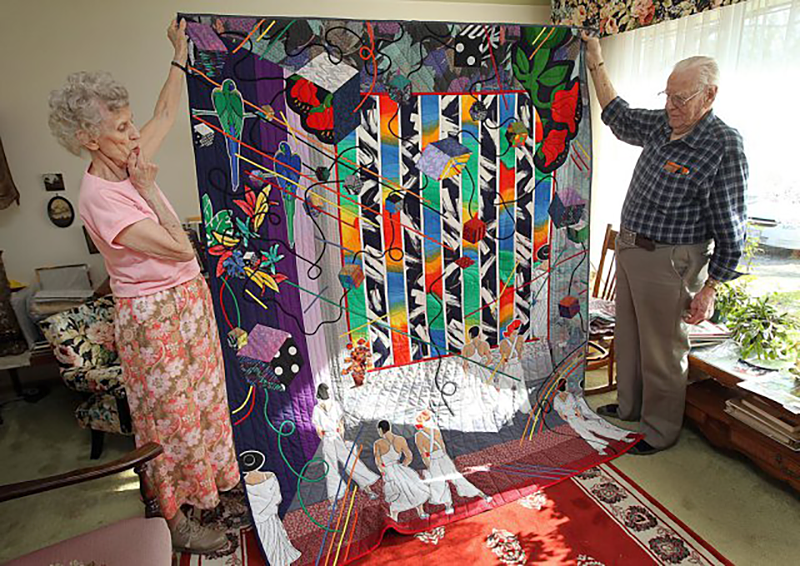 Betty and Albert Ives with The Red Box Exhibit.

To learn more about Betty’s approach to art quilting, we recommend an article by the Windsor Star: windsorstar.com/entertainment/betty-ives-a-quilt-artist. You can also see Betty’s last one-woman show at this link.

Cozy up with fall fabrics.